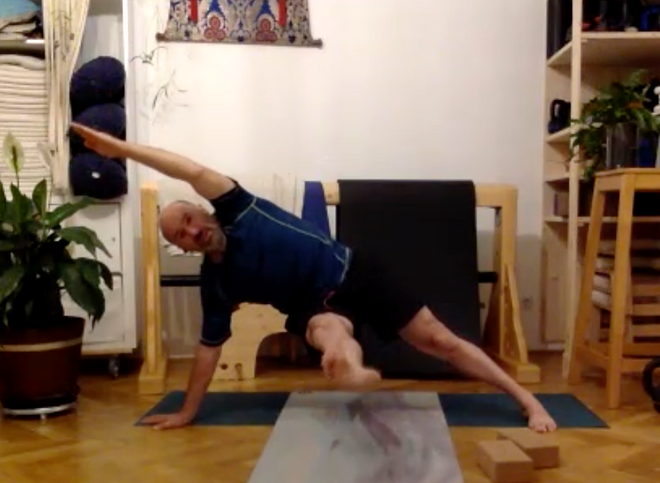 Bruno Teyssandier was an active mountain and mountain bike tour guide before he came in contact with yoga in 1998. After an accident in Nepal (1999), which made him turn around 180 degree, he decided to participate in a yoga teacher training in LA California in the fall of 1999. Since then, he has studied in India in 2000, 2001, 2003, 2004, 2014, 2015, 2016, 2017, 2018. He owned, directed and taught at Yoga 108 in Marin county (California) and New Orleans (Louisiana) for 7 years, taught around the world from 2004 to this day. He graduated from many methods of Hatha Yoga included but not limited to Bikram Yoga (L.A California 1999), Iyengar Yoga Therapy Program (Poona, India 2000-2001), Iyengar Yoga Apprenticeship (San Francisco, California 2001-2002), Moksha/Modo yoga (Montreal, Canada 2010) , studied with Sri K Pattabhi Jois (Ashtanga yoga) in Mysore India for 9 months 2003-2004, Cameron Shane (Budokon Yoga) in Dusseldorf 2015, and mainly he has been a dedicated student of Manouso Manos, who is one of the most capable and experienced of the Senior Iyengar Yoga Teachers, for over 16 years. Bruno was invited as a guess teacher to two “Yoga to the people” teacher training in 2010( N.Y.C and San Francisco) and as a lead teacher in the Bali yoga Wien 3 weeks program in Bali in Oct 2017 and Feb 2018. In 2015, he was introduce to Qigong and has been practicing weekly since as well as Tai Chi since 2016. In 2017, he discovered Kalaripayattu and spend 8 weeks in Kozhikode (Kerala-India) to study the basics of this art. In March 2018, he graduated from Flyhighyoga@ in Bali, a method that is inspired by the Iyengar yoga tradition using device to hang and be supported by belt hooked on the ceiling. His directions are firm but nurturing, he teaches from a warm heart and sense of humor, yet with strong focus.